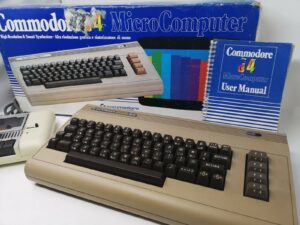 When I had enough money and time too little, a good chunk of my spare time was scouring thrift stores for retro gems.
This was often accompanied by jubilation and occasionally with a downer because it was incomplete, did not work or even in some cases completely destroyed inside.
I found a boxed Commodore 64 during one of my raids, which unfortunately did not function properly when I got home when I went to test.

When I turned it on, I did get the familiar 2-color screens, only the greeting was less pleasant as they used to be (see photo).
I didn't really have much to start with, so I started pushing all the chips right into their sockets. (due to heat and prying, a chip sometimes comes loose from the socket)
Unfortunately, it turned out that it did not really make a difference and I really had to work to troubleshoot.
My search for what I had given as the description of my mistake gave me a number of hits on Google. 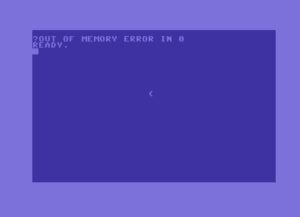 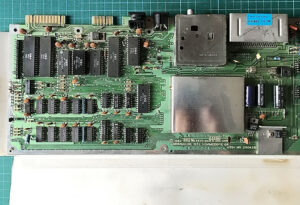 The motherboards of the C64 have been overhauled a number of times over the years, including cost-reduced versions.
That means fewer parts and therefore more profit (and often less chance of failure).
My retro retro motherboard (revision 250425) is a fairly old board, which is a bit more difficult to fix if I can believe some of the messages I've seen in all kinds of repair forums.
but a very big advantage of this older board is that almost all custom chips are on sockets.
That makes it a lot easier if you want to troubleshoot / repair in the simplest way

You can then simply exchange chips from the same retro machine that you know works with those from the faulty commodore 64. In the hope that with every chip exchanged, this will give a little more sign of life.
Unfortunately I don't have any spare parts for such repairs, and my other retro breadbins are not stocked.
I have decided to leave the case and because the first descriptions showed that U10 iig was not running smoothly, I initiated a number of things: 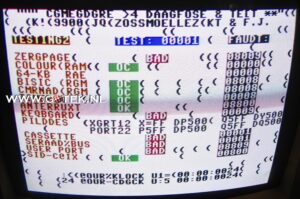 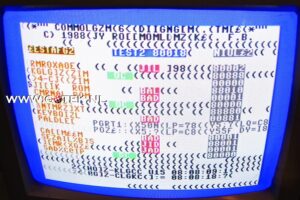 This system contains 8 RAM chips so I had enough to replace all chips if necessary.
There is a way to test if rams are defective without soldering, by means of piggybacking .
Although this works, it is time-consuming, not for permanent use and also not without risk (if you make a short it could break more than there was already broken.

Because I always ended up with RAM chip U10 via various retro repair channels, I chose to order a desoldering device (ZD-915) and when I could pick it up at Eleshop 2 days later in Eindhoven , I could start.
Desoldering on the retro repair channels on YouTube is much easier than doing it yourself at home, I can give you that.The 🙂
motherboards of the Commodore 64 have a problem that the print tracks will bump, and then you do not make good contact with it desoldering station.
Finally I was able to remove U10 neatly and soldered a socket in the motherboard. 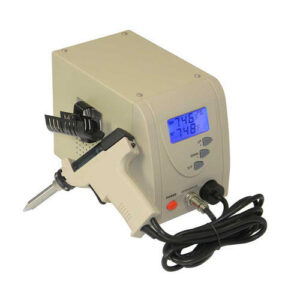 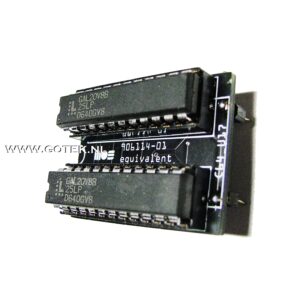 And then I had to wait for Ali's RAM chips, in the meantime I realized that it would be wise to remove all IC's from their socket to see if there was not a bent pin.
And you shouldn't have done that now, after checking and putting it back ... ZIP, NADA, NOTHING.
Damn, well then the stuff was put away until the rams would arrive and I could continue with the repair, and when they finally arrived 6 weeks later, again, RAM in the socket and with bated breath .. clack ... nothing ... crap what now.
Then let's take a look at what causes a black screen, just checked with a colleague retro computer collector on his website.
It turned out that, among other things, a Defective PLA often causes this problem, so I had to have a replacement PLA, luckily I learned from a brilliant initiative by a fellow retro enthusiast, a PLA based on 2 GALs (programmable logic chips) to retro 64 to be repaired with new (er) technology.
So I downloaded the print design, submitted it, ordered GALS and 3 weeks later I could test my own baked PLA .

Unfortunately the PLA replacement did not bring any light, what now, then light up all the chips again, straighten and inspect the pins and scrub the pins with Alcohol 90%, and that got me some dirt.
Put the chips back one by one and then click on the c64 again, and bingo ... we had images again, a whole screen full of clutter with somewhat recognizable text here and there.
Then look further, character rom, basic rom, kernal rom maybe, unfortunately I didn't have any spare's so I decided to design an adapter so that I could use 28 pin Eproms instead of the 24 pin custom chips.
As a basis I had found some info here and there and had understood that the footprint had to be as narrow as possible so that 3 could be placed next to each other. 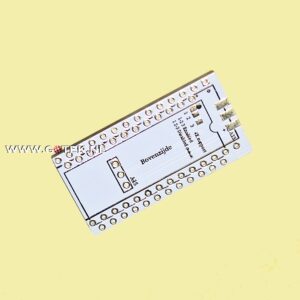 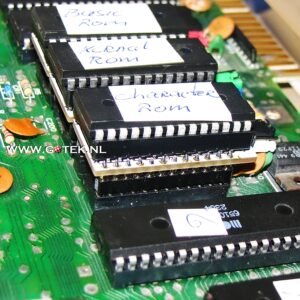 Yesterday morning the PCBs arrived and I could continue again, made a Basic ROM, made a Character ROM, made a Kernal ROM and built the PCBs.
one by one replaced the current ROMs for the new ones made by myself, and NOP no difference.
When I put the original ROMs back, I got a black screen again, but now I noticed that the chips were very loose in the sockets.
And there came the conclusion: this board must have had an extension with square pinheaders.
Once they have been in the socket, it is ready, and they cannot be used for anything else.
So that problem is now clear, and it will be fixed, for now it works fine with the PCBs I made (gold plated round pin headers, which do not buckle the socket)

The C64 testcartridge (Resurrection V1.00) that I (again) have built especially for the test (and repair) of this retro machine kept giving me hints that I did not understand 🙂
When I finally experienced a eureka moment and I realized that I 2 brands of RAMS of the same type, I replaced the RAM placed in the socket with one of the other type, and voila, everything was fixed all of a sudden, the machine ran the core tests overnight without any problems and so I can now conclude that from the purchased RAM chips, the KM4164 does not work , and the TMS4164 does work.
Now I just have to find where I left all the screws 4 months ago 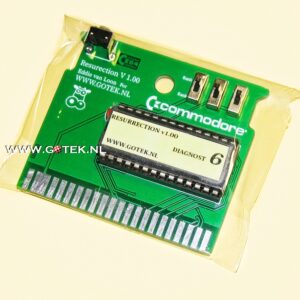 Thanks to the following retro / repair sites:

Pictorial.com (Screenshot based Troubleshooting the C64)

Diagnostic Cartridge, Indispensable for troubleshooting and repairing your Retro machines (In this case your C64) 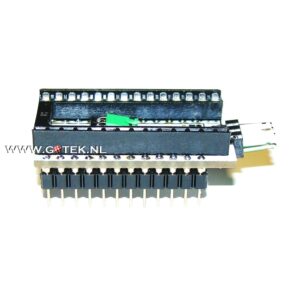 With this adapter you can use a 28 Pin Eprom in your C64, instead of the Commodore custom 24 pins Kernal, Basic and Character ROM.

Commodore 2364 ROM Replacement adapters also fit with its 3s next to each other.