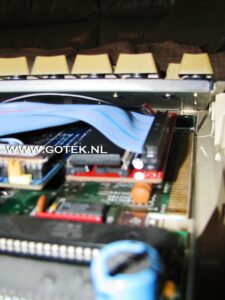 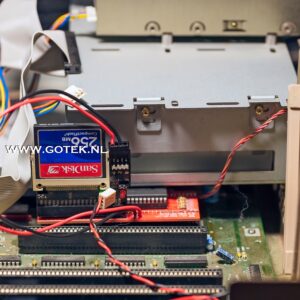 But first a small introduction to the IDE / ATA Interface:

I started developing this interface with a specific target group in mind:
The (Re) Introducer in the world of the Commodore Amiga.
Why specifically this target group? , simply because there are already a number of (professional) solutions that offer the possibility of storage on a hard disk or multimedia card to the more advanced Amiga user.
Think of hard disk products such as Commodore ( A590 ), GVP ( HD + 8 ), or the ACA 500 Plus .

The disadvantage of all these solutions is the accompanying price tag.
The first 2 have become collectors' items, based on (poorly available and therefore expensive SCSI disks), while the latter is a great solution if you want to spend your money on a total package of Compact-Flash based storage.

As a (re) entrant, it is nice if you can get acquainted with the phenomenon of mass storage with a small investment before you have to pull out your wallet for a hefty loss (100-250 euros). 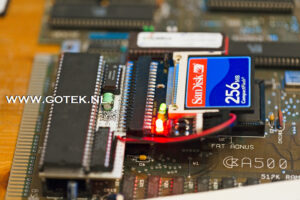 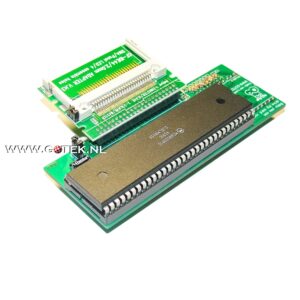 Finally, I wanted a solution that would fit internally in my Amiga 500 without a cable salad.
With the latest revision of my internal interface for the Amiga 500, this wish has become a reality.
No cables whatsoever, you simply place the interface between the CPU and the motherboard and you're done.


Yes, I designed the interface in such a way that at least one of the options always fits ... But:
If you already have an internal extension somewhere around the 68000 CPU, that can cause problems.
For the Horizontal Direct Mount CF-2-IDE adapter, a kickstart switch may be an obstacle.


Yes, I designed a special 68000 interface for use in an Amiga2000, with a direct attached CF-2-IDE adapter standing upright along the drive bay.
The same interface also offers the possibility to use a Compact Flash Card externally via an IDE cable with a slot CF adapter

I read about a Zorro II interface for the Amiga 2000 ?


Yes, that's correct, as proof of concept I made a number of cards that use the CPU slot (Zorro II compatible slot but with only 86 pins)
For now, this is only a 1st concept version, a later version will actually be option.

I already have a 68000 based extension, does this work together ?


Working together, yes this works fine, only it will not fit under your keyboard, the headers used to place your extension, together with the headers for the IDE Interface, take up such a lot of height that the keyboard (and therefore the hood) will most likely no longer fit.

Does this interface work with Kickstart version X.XX ?


This interface works with all versions of the Kickstart ROM, but with a number of dependencies:
at least Kickstart 2.05 if you want to use a CD-ROM drive.
I dare not say whether the IDE driver works with Workbench 3.X, the interface has been tested with the combination Kickstart 3.1 / workbench 1.3 and that works without problems.

Can I place files on the Compact Flash card myself ?


Of course you can place files on the Compact Flash card yourself, in exactly the same way as you used to copy files to the external hard drive.
That is to say via floppies, the Compact Flash is set up as a 'real' Amiga Harddisk, which means as much as set up with the Amiga Fast File System (FFS), which is not readable on the PC.

Can I also read / write the Compact Flash card on the PC ?


No, not just like that: the Compact Flash is set up as a 'real' Amiga Harddisk, which means as much as set up with the Amiga Fast File System (FFS) which is not readable on the PC.
Yes: If you are more familiar with the matter then you can mount the CF in WinUAE as a hard disk, create a 2nd hard disk based on a directory on your PC, so you can copy files from the PC directory based hard disk to the CF based hard disk.
That is the way I use to further develop the CF which is optionally available from the IDE Controllers.

Can I install a larger Compact Flash card ?


Yes and No, you can easily place a large card, but unfortunately it is not really easy to make the Amiga recognize this card. The people who have worked with the first generations of PCs will still recognize it.
You must specify the drive parameters (cylinders, sectors per track, sectors per cylinder if you want to install the map.
If you have been able to partition the map then you will need to mount the partitions with the correct partition information (filesystem, partition type, start and end sector) )
I specially built this setup so that people do not hassle with all these configuration options, as I set the liver is directly plug and play.

Can I install a hard disk instead of the Compact Flash ?


Yes you can, but just like with a larger CF card you will have to manually find and enter the drive parameters and partition data yourself.
Furthermore, you will have to provide an external power supply for your hard disk, the 68000 version of the IDE Interface in combination with the standard Amiga 500 power supply is not suitable for supplying hard disks with the required voltage.

Can I install a CD-ROM drive ?


Yes you can, but you will need at least kickstart 2.05.
The only drivers I have been able to find work from Kickstart 2.05, and although there is a driver set that should work from kick1.2, I have not been able to get it running.
Mind you, with the 44 pin interface it does get a bit more complicated to connect a CD-ROM, if this is your goal you should consider purchasing a classic 40 pin IDE interface.

Does the IDE interface work with Master / Slave combinations ?


Yes I have tested the interface with various master / slave combinations of CF-2-IDE adapters, hard disks and CD-ROM and DVD-ROM drives.
Of course this means that you must have a device that is supported by the IDE / ATAPI driver you are using.

Does the IDE interface also work with SD Cards ?


No, not necessarily, a Compact Flash is an almost 100% identical implementation of the IDE Protocol. An SD card is not.
So it will depend enormously on how good the IDE implementation of an SD-2-IDE adapter is whether it will work on the IDE Interface.

How much memory does the IDE Interface take up ?


Nothing, the IDE interface itself does not take up memory, what does take up memory is the driver and the buffers created by mounting.
What I actually mean by that, if you load a game from floppy / ADF then no memory is taken up by the hard disk and you have your full memory at your disposal.
If you load the hard disk driver with the special boot floppy and mount the device, it will take up about 100 KB of memory.

Does the IDE interface also work with extension X ?


Unfortunately I don't have a lot of expansions for the Amiga 500 and can't say much about it.
What doesn't work: KCS PowerPC Boards, Trapdoor Memory extensions over 512 KB.

I prefer not to open my Amiga 500, is there also an external version ?


I've been thinking about that for a while, and since this week a prototype is running, it will also be available in the very short term, more info can be found here. 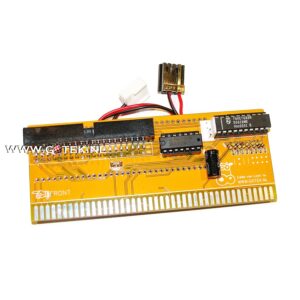